Hallmarks of Aging – Role of Glycation Part 5: Loss of Proteostasis 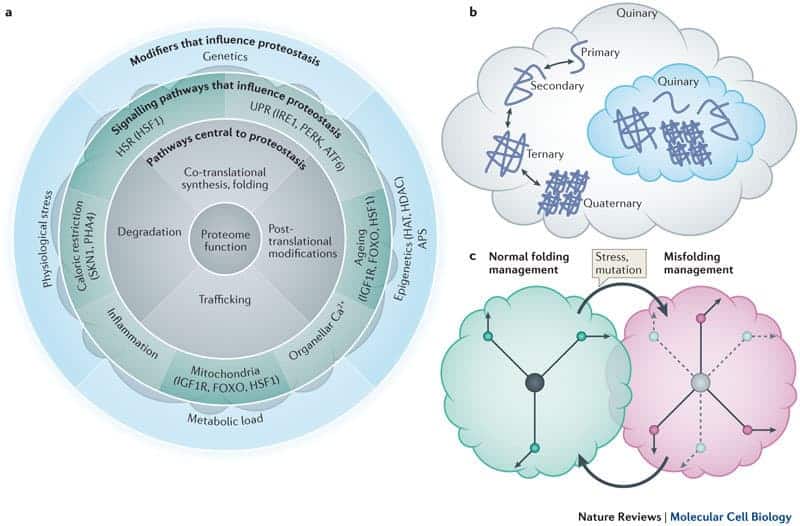 Proteostasis, or protein homeostasis, is the successful quality control of the cells’ proteome (that is, the entire set of proteins expressed by a cell or organism at a given time). All proteins are subject to a variety of structural modifications post-translationally such as methylation, acetylation, and very often negatively, by glycation which goes on to cause the formation of advanced glycation end products as we have seen previously.

Through an elaborate monitoring and control set of processes the stability of the proteome is maintained by what has been often referred to as the proteome network (PN) (1). This PN is comprised of several complex protein linked processes that can, when working properly, identify damaged or misfolded proteins and disposition them to either repair or degradation. Within the PN are a group of sets of proteins known as chaperone proteins (CP). These CP are the drivers of the repair, rebuild or degrade processes. CPs are very tightly regulated to perform these tasks and if compromised, their ability to adequately address proteome stress and damage also becomes reduced.

A common reaction that causes the type of misfolding of proteins is the glycation reaction itself. The sugar residues that are reactants in the glycation reaction bind to the proteins as we now know. This glycation occurs as post-translation modification which may apply both to normal and mutated proteins. This causes modification of protein structure and conformation and gives rise to this misfolding or unfolding. Once the final AGE is formed, the dysfunctional structure is very stable and resistant to protease action and, thus, these damaged proteins begin to accumulate with the cell.

The accumulation in itself creates cellular organelle dysfunction and can lead to overall cellular senescence or directly to apoptosis. This accumulation is also seen in many disease states (the quintessential one being Alzheimer’s disease).

Research has implicated NAD+ in the production of aberrant protein folding and also to oxidative damage of the proteins.(2) In the process of forming NAD+ via the glycolytic pathway the triose phosphates created spontaneously decompose to our old friend, methyl glyoxal (MG). And from what has been mentioned earlier we can envision what production of MG can mean to proteins in harms way.

It is becoming increasingly clear that the glycolytic pathway and its production of methyl glyoxal is a factor in the overall aging process and in particular, for this discussion, in the ability of protein quality control systems (PN) to manage the disposition of damaged and misfolded proteins. In addition, as we have seen, MG can have a profound effect on creating mitochondrial and endoplasmic reticulum dysfunctions. The PN is mediated by polypeptide chaperones which can also be attacked by MG and as a result this tightly regulated PN mechanism becomes inefficient. When this reaches a critical mass the PN ultimately will be overwhelmed and cease to maintain control of production and proper remediation of dysfunction caused by misfolded and damaged proteins including the chaperone proteins critical to PN functioning. In addition, this PN collapse creates AGE associated ROS that can damage cellular proteins of the organelles, such as mitochondria and endoplasmic reticulum, exacerbating the situation.

This discussion was a very oversimplification of glycation and proteostasis.   The details can get quite complex and involve the overall activity of glycolysis, the formation of reactive aldehydes and the role of ROS formation on cellular proteins and eventually organelle functioning.   The production of AGEs can be created spontaneously from glycolosis and also activate ROS in other ways including their binding to the receptor for AGE (rAGE).   This AGE stimulated production can also be generated from exogenously ingested AGEs.   For sure ROS alone can be a major culprit in compromising proteostasis.   Here again, we can see the glycation reaction being conspicuously present in a hallmark of aging.

Nick Pokoluk is a biochemist, Six Sigma Black Belt of Transformational Change Methodology and Spencer Institute certified wellness coach.   He can be reached at npokoluk@wwtpi.com or openlcr@yahoo.com