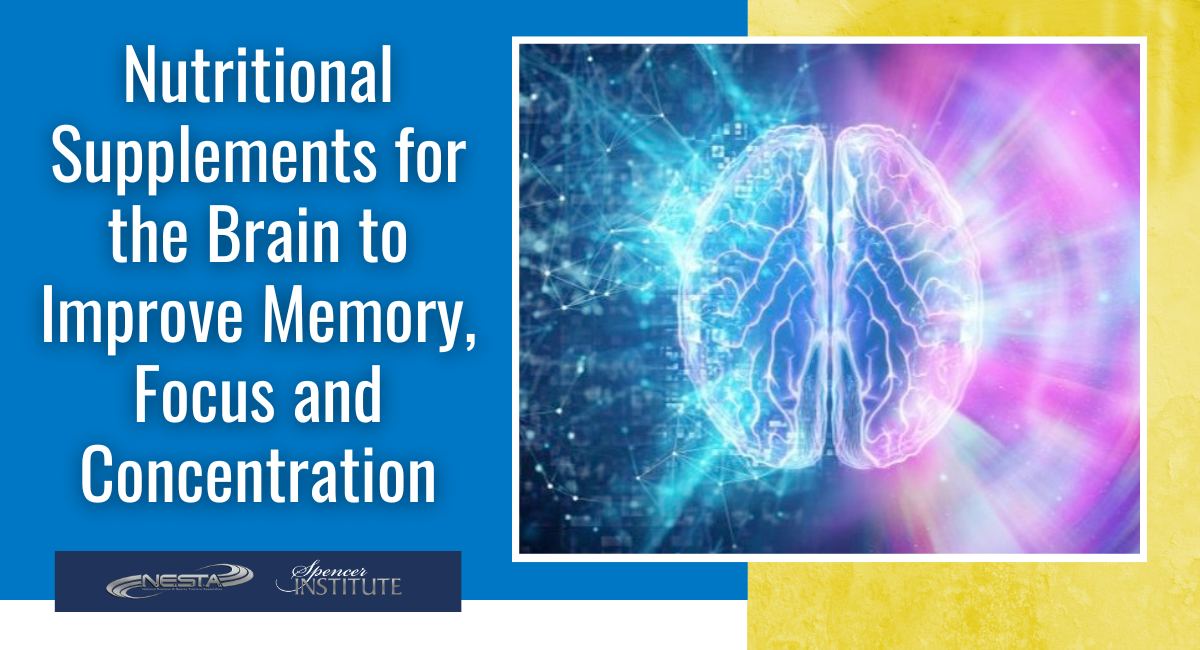 Nutritional Supplements for the Brain to Improve Memory, Focus and Concentration

The need to expand your knowledge of nutraceuticals cannot be overlooked. Often credited with serving to support optimal cellular functioning, nutraceuticals play an important role in ensuring your clients have the foundational building blocks that allow them (and their physical form) to continually produce neurotransmitters and co-factors at levels essential to supporting optimal brain health.

One of the most popular supplements to support brain function is Gingko Biloba. This extract, from the Gingko Biloba tree, is native to China. It is widely recognized for its neuroprotective antioxidant properties and ability to enhance circulation. Ginkgo extracts contain several active constituents including flavonoids terpenoids and organic acids. These compounds have been shown to act as free radical scavengers which give Ginkgo Biloba’s antioxidant and neuroprotective properties; promising research studies report that supplementation with Ginkgo Biloba protects cell membranes from lipid peroxidation and neurons from oxidative damage.

Ginkgo Biloba’s ability to improve cerebral and peripheral circulation through decreasing blood viscosity and affecting vascular smooth muscle contraction may result in the benefits reported with blood flow. Ginkgo has also been shown to inhibit cellular toxicity, induced by beta-amyloid proteins which are implicated in Alzheimer’s disease and have been demonstrated to enhance cognition in healthy individuals as well as those with age-related cognitive decrements.

Furthermore, Ginkgo Biloba has been shown to improve working memory when used on its own, and when combined with vinpocetine. Vinpocetine is an alkaloid compound extracted from the periwinkle plant, and functions as a phosphodiesterase inhibitor. It is an effective vasodilator and has been used in the prevention of cerebral vascular disease and has also been shown to have anti-inflammatory and neuroprotective properties. Positron Emission Tomography (PET) based studies demonstrate vinpocetine’s uptake across the brain and its ability to effectively regulate blood flow and metabolism.

Vinpocetine appears to have many varied pharmacological effects for example some studies indicate that vinpocetine might enhance cerebral blood flow without affecting peripheral blood flow. preliminary evidence indicates that vinpocetine stimulates cerebral metabolism and increases glucose and oxygen consumption by the brain. Potential mechanisms for these effects of vinpocetine include direct or indirect cholinergic activity, augmented norepinephrine effects on cortical cyclic adenosine monophosphate (AMP), and increased turnover of the brain’s catecholamines. It is currently being studied for improvements in microcirculation in the brain and for increasing cerebral blood flow by improving red blood cell deformability. Vinpocetine may also play a role in reducing cerebral vascular resistance and inhibiting platelet aggregation.

Alpha-lipoic acid (ALA) is a powerful antioxidant, which neutralizes free Current research is suggesting that supplementation of ALA serves to detoxify and protect the body. ALA serves to recycle both vitamins C and E, as well as supporting glutathione production, making it a vital tool in maintaining optimal antioxidant production in the body.

Since ALA is soluble both in water and fat, it can move into all parts of the cells to remove damaging free radicals.

Free radicals are atoms, or groups of atoms, that contain an unpaired electron. While lasting less than a second, if in excess they can cause irreversible damage to the heart, nerve, and immune cells of the body. Free radicals can be produced by radiation, x-rays, environmental pollutants – like tobacco smoke. Aspects of a poor diet – such as cooking fats at high temperatures, can increase excessive free radical production. This can also result in damage to genes, which then produce mutated proteins. Free radicals can also destroy cellular membranes. Ultimately, excess free radical production is what leads to cellular aging.

ALA has also been shown to be very powerful in controlling blood sugar levels in individuals with diabetes. It can also detoxify heavy metals and protect nerve tissue against oxidative stress.

ALA acid is synthesized by the body, but it is also found in the diet by consuming red meat, organ meats, spinach, broccoli, potatoes, yams, carrots, beets, and yeast.

Huperzine (also known as “Huperzine A”) is an alkaloid extracted from the Chinese club moss. In studies, it has been seen to function as a reversible selective inhibitor of acetylcholinesterase, but has also been shown to protect against oxidative injury, neuronal apoptosis, and glutamate-induced toxicity. Huperzine elevates acetylcholine levels throughout the brain, especially in the frontal and parietal cortex. it also protects against glutamate toxicity by blocking glutamate-induced neuronal calcium influx and cellular death. This sounds very much like a discussion for a science laboratory but in essence, huperzine boosts acetylcholine levels, which can serve to support cognitive function.

In studies measuring the effects of repetitive sub-concussive impacts in living professional football players on brain function, interesting results have been published in the past 15- 20 years. Many types of supplements have been tested on this unique portion of the population. Since football is one of several contact sports, there has been a fair amount of attention focused on the significant damage to the brain among those with head injuries (concussions, etc.) and what the effects of certain supplements are.

One recent study observed both imaging and assessments of cognitive and psychiatric function for a group meeting these criteria. In addition, researchers used a rehabilitation component to their study to evaluate the effectiveness of the supplements and nutrients often evaluated for supporting brain health and function.

While much is still unknown about the long-term results of interventions, coaches are encouraged to explore supplementation with an open mind. It may be as simple as recommending a high-potency multivitamin and omega-3 fatty acid supplement; It may include an intervention to coach a client in need of lifestyle interventions (including nutritional coaching or access to a weight management program).

The range is broad. If sleep is a concern, then this is a coaching opportunity. But when there are needs beyond what a coach can address, it is assuring to know that clinical/lab testing is always an option to be recommended. This might be as common as a sleep apnea study or your client may be part of a testing protocol done on the brain by researchers performing a study.

The benefits of supplementation are believed to be significant. These include enhancements of:

Often, the results reported by participants in research studies include improvements in:

Approximately 6.2 million Americans are living with dementia, which affects not only memory, but also decision-making and one’s overall ability to perform daily activities. Despite its rising prevalence, dementia isn’t a normal or inevitable part of aging. But this fate is a common concern among adults, particular those approaching older ages.

Taking brain health supplements has become wildly popular. In fact, 48% of seniors polled admit to taking some type of vitamin or supplement to boost their memory, and 32% used fish oil or omega-3 supplements.

The 2019 AARP Brain Health and Dietary Supplements Survey found that 26% of U.S. adults age 50 and older take at least one of these products. Not only are brain supplements widespread, but its big business, too: the AARP projects that sales of these products will reach $5.8 billion by 2023. But do over-the-counter brain health supplements really help sharpen fuzzy thinking or boost mental alertness? Could they really help stave off mental decline, or even Alzheimer’s?

The short answer is a caveat to all Brain Fitness Coaches: supplements taken in support of brain optimization are unclear. There is little scientific evidence about the effectiveness of brain supplements. The truth is, no one should take supplements of any kind, including those labeled as “all-natural,” without talking to your physician about it first. We understand that some medical doctors have a very limited knowledge of nutrition and/or supplementation.  However, it’s still a good idea.

Supplements aren’t regulated. The U.S. Food and Drug Administration (FDA) doesn’t regulate dietary supplements in the same way that it controls prescription and over-the-counter medications. That means health officials do not test supplements for safety or effectiveness, and they could contain harmful hidden ingredients. Brain supplements also can’t be advertised as treatments for diseases, such as Alzheimer’s, but many are marketed as being beneficial for mental focus and memory—claims that aren’t backed by iron-clad research. Brain Fitness Coaches are encouraged to research any supplements you discuss with your client; remember, we never prescribe, diagnose or treat. We only guide or make suggestions. That said, some clients may see real benefits to some of the supplements discussed in this article.

The topic of nutraceuticals are discussed in detail in the Sports Nutrition Specialist Certification. Interestingly, many supplements which improve sports performance also improve brain performance.