Programming for Individuals with Hypertension

Hypertension is a major health problem in around the world as it is a primary risk factor for cardiovascular disease, stroke, and renal disease. It is estimated that nearly half of U.S. adults have prehypertension and nearly one in three have hypertension. An individual is considered to be pre-hypertensive if their systolic blood pressure is between 120 and 139 mmHg and/or their diastolic pressure is between 80 and 89 mmHg and hypertensive if their systolic is above 140 mmHg and/or their diastolic is above 90 mmHg or if their BP is controlled with antihypertensive medication.

Exercise has been shown to reduce the magnitude of increased blood pressure over time in individuals at risk for developing hypertension. The mechanism by which exercise helps to control hypertension is not well understood. Possibilities include decreases in plasma norepinephrine levels; increases in circulating vasodilator substances, enhanced control of elevated insulin levels; and, alterations in renal function.

The goals of any antihypertensive therapy program are to control blood pressure and to reduce cardiovascular risk by the least obtrusive means as possible. Modifying one’s lifestyle is the easiest and can be done with the following recommendations:

Exercise programs should include a focus on low-level cardiovascular exercise. Interestingly, exercise at a somewhat lower intensity has as much, if not more, impact on lower BP than exercise at higher intensities. This is an important consideration for certain individuals that will not tolerate higher intensities of exercise. The frequency of an exercise program should be extensive, up to seven days a week, depending on the duration. The duration should be a minimum of 30 minutes of continuous exercise. The intensity should be 40-60% of V02 reserve. Strength or resistive training should not be the focus of a program for individuals with hypertension. Strength training has not consistently been shown to significantly lower blood pressure. Light resistance training as an adjunct to cardiovascular disease is recommended for a well-rounded program.

Exercise at 40-70% of V02 max appears to lower resting BP as much, if not more than exercise at higher intensities. 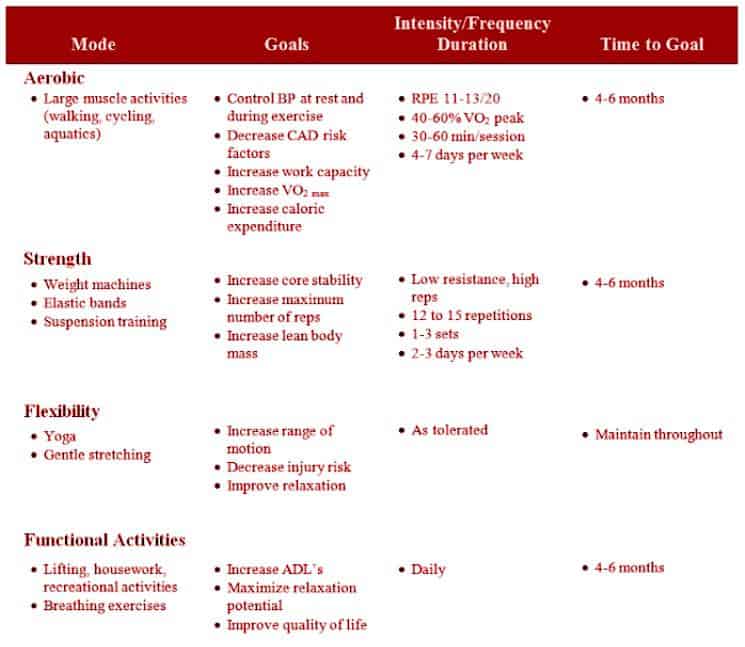 You can learn more about training clients from Special Populations in the Personal Fitness Trainer course.