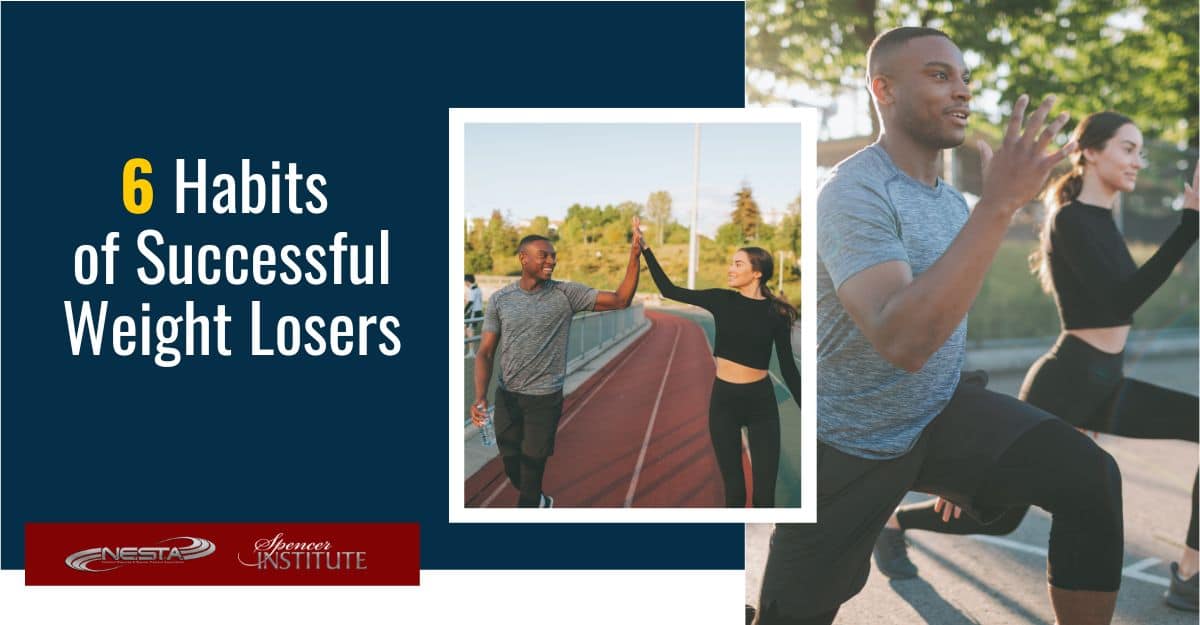 From Lose It Forever: The 6 Habits of Successful Weight Losers from the National Weight Control Registry by Jason R. Karp, PhD creator of the REVO₂LUTION RUNNING™ certification program

Why Do Successful Weight Losers Exercise So Much?

Partly because it takes a lot of exercise to prevent a return to previous weight, and partly because exercise has become a habit of this population. Ninety-two percent of National Weight Control Registry (NWCR) members exercise at home, 40.3% exercise regularly with a friend and 31.3% exercise in a group. Walking, running, cycling, weightlifting, aerobics classes, and stair climbing are the most common physical activities. Walking is the most popular, with 76.6% of NWCR members doing so as their preferred mode of exercise. Those walkers average more than 11,000 steps per day. Weight training has become more popular over the years, with 37.0% of men and 36.6% of women who enrolled in the registry from 2001 to 2004 doing it compared to 25.3 of men and 22.9% of women who enrolled from 1993 to 1996. All these data have led the founders of the NWCR to conclude that the optimal amount of exercise to maintain the weight loss is about one hour per day or, in terms of caloric expenditure, 2,500 to 3,000 calories per week.

In the days of “clean eating” and low-carb, vegan, paleo, gluten-free, keto, dairy-free, juice-cleanse diets, it’s become trendy to claim that diet is everything. Indeed, most fitness trainers claim that physical appearance and body weight are eighty percent nutrition and twenty percent exercise and that “abs are made in the kitchen.” However, there is no scientific evidence to back up that claim. Exactly how much of a person’s physique is due to nutrition, how much is due to exercise, and how much is due to genetics is difficult to determine. (Research on identical twins raised apart in different environments has shown that genetics has a large influence on body weight.) It’s presumptuous to think that the specific foods you eat are more important to your cosmetics, fitness, and health than are exercise and genetics. I’m pretty sure I didn’t get my sculpted legs from eating kale salads; I got them from running six days per week for 36 years. And so it is for other physically active people as well. Athletes, bodybuilders, and dancers all do a considerable amount of physical training to look and perform the way they do. The sculpted legs of runners and upper bodies of fitness magazine models didn’t get that way just by eating fruits and vegetables. If we take two people, and one eats perfectly clean with a nutrient-dense diet and no processed foods but doesn’t exercise much, and the other works out in the gym every day but has a mediocre diet with the occasional chocolate chip cookie, who is going to look better and be fitter? Obviously, the latter.

A decrease in physical activity is a major reason why people gain weight. Think of your high school’s star quarterback who has a big belly at middle age. How many people at age thirty or forty or fifty weigh the same as they did in high school? The NWCR has shown that individuals who regain weight within one year show marked decreases in physical activity of more than 800 calories per week, with no change in overall calorie intake. That means that weight losers are regaining their weight not because they start eating more, but because they start exercising less. This is a major finding of the NWCR—a large part of regaining weight after losing it is due to the inability to maintain exercise habits for the long term.

Most of us have habits. Some of our habits may lead us to be effective and successful and some of our habits may lead us to be ineffective and unsuccessful. Some of us may roll the toilet paper from the top and some from the bottom. Other habits—both positive and negative—have much greater consequences. Changing those habits, or at least modifying them to achieve your goals, can be difficult, especially with age. The older you get, the more “you” you become. And so your habits that led you to become overweight also lead you to remain overweight, especially as you age. As physicist Isaac Newton taught, a body in motion stays in motion unless acted on by an unequal force. To change your motion, you need an unequal force.

Habits don’t become habits overnight. When we get excited about doing something, it’s easy to jump in and, in the words of Nike, just do it. But that strategy often fails in the long term because “just doing it” doesn’t always or even usually make a behavior stick. That takes persistence. To be persistent, you need to create the environment for the behaviors to become automatic and become habits. It often takes months or even years to make permanent changes. Many successful weight losers fail many times at keeping their weight off before finally succeeding. All those failed attempts are not really failures because they created the opportunity for the successful attempt. It takes many tries at doing something over and over and over again before the actions become habitual. Think about the last time you drove your car. Did you have to consciously think about where to put your hands on the steering wheel? What about when to press on the brake or look in the rearview mirror? But you had to bring a certain consciousness to all of those things when you first learned to drive a car as a teenager. Driving a car wasn’t a habit back then. It took many attempts at driving a car for it to become a habit. Driving becomes such a habit that, oftentimes, we don’t even know how we got to our destination!

Seventy-five percent of Americans (and 81% of obese Americans) perceive lack of willpower as the biggest barrier to successful weight loss. But, according to psychologist Wendy Wood, Ph.D., it’s a myth that behavior change is all about a strong intention and the willpower to implement it. Rather, her research suggests, that behavior change is about forming habits. Habits go beyond intention and willpower; they are automatic behaviors. Most people don’t consciously set the intention to brush their teeth every day; they just do. Becoming a successful weight loser requires exactly the same approach: creating the habits to keep your weight off so that your actions become automatic. Dr. Wood says that when we repeat an action over and over again in a given context and then get a reward for doing so, we are learning very slowly and incrementally to associate that context with that behavior. In other words, habits have a life of their own because once formed, they stop being conscious and become automatic.

And that’s how most diets fail. After months of sticking to a specific way of eating, all it takes is one re-introduction of a previously conditioned stimulus to fall off the wagon and revert to the undesirable habit. Most diets and weight-loss plans are short-term fixes to a long-term problem. They lure you with promises of quick, dramatic results, like “Lose ten pounds in ten days.” They don’t emphasize the critical aspect of being able to maintain weight beyond those ten days and for the next ten years or more. But everyone who loses weight wants to keep it off. After all, there’s little point to losing weight if you’re just going to regain it. Popular diets don’t teach you the habits or provide you with strategies to keep the weight off. Perhaps they don’t do that because that’s not the sexy, alluring part of weight loss. It’s alluring to say that you can lose ten pounds in ten days. And it’s even possible that you can. Weight loss, especially rapid weight loss, is exciting. There’s not much that’s exciting about maintaining weight, even though it’s more important. But, you’ll almost surely gain back those ten pounds unless you have developed the habits and have a system in place to prevent that from happening.

When you earn the REVO₂LUTION RUNNING™ certification, you not only get the best running education in the world; you get a complete running experience, because what we do serves as the proof of what we believe.

Is your recertification coming up? Learn more about earning your CEU credits. You can find the full list of CEU courses here.

If you are ready to start your online personal training or coaching business, don’t forget to learn more about our online coaching course. You will also really enjoy this very comprehensive training course called Online Expert Empire.

NESTA and Spencer Institute coaching programs are open to anyone with a desire to learn and help others. There are no prerequisites.