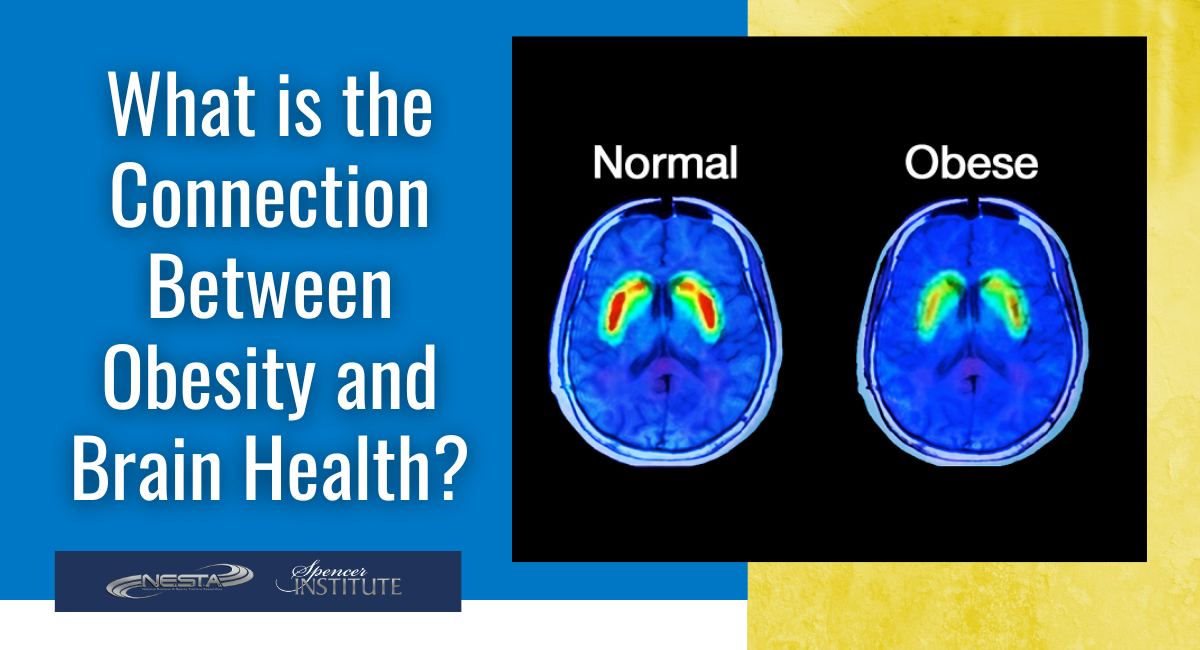 What is the Connection Between Obesity and Brain Health?

It’s a fact. Obesity has significant negative effects on your overall health. Most of us know this already. But maybe less known is its role in brain health.  Science continues to conduct research studies to measure the impact of elevated weight on brain function.

It is normal for us to think about the brain and its well-being when it may be after a traumatic brain injury – or repeated impacts arising from contact sports. Indeed, these events have been linked to chronic problems in brain function; other factors seem to just make sense on the disease continuum – from high blood pressure to the increasing prevalence rate of Alzheimer’s disease, the latter being exacerbated by lifestyle habits that are omnipresent in our daily lives. This can include a long list, such as harmful diet, excess alcohol consumption, and chronic sleep deprivation. We commonly think about these disorders once symptoms arise. however, the underlying neuropathology has been present for years – even decades – prior to any symptomatic onset. 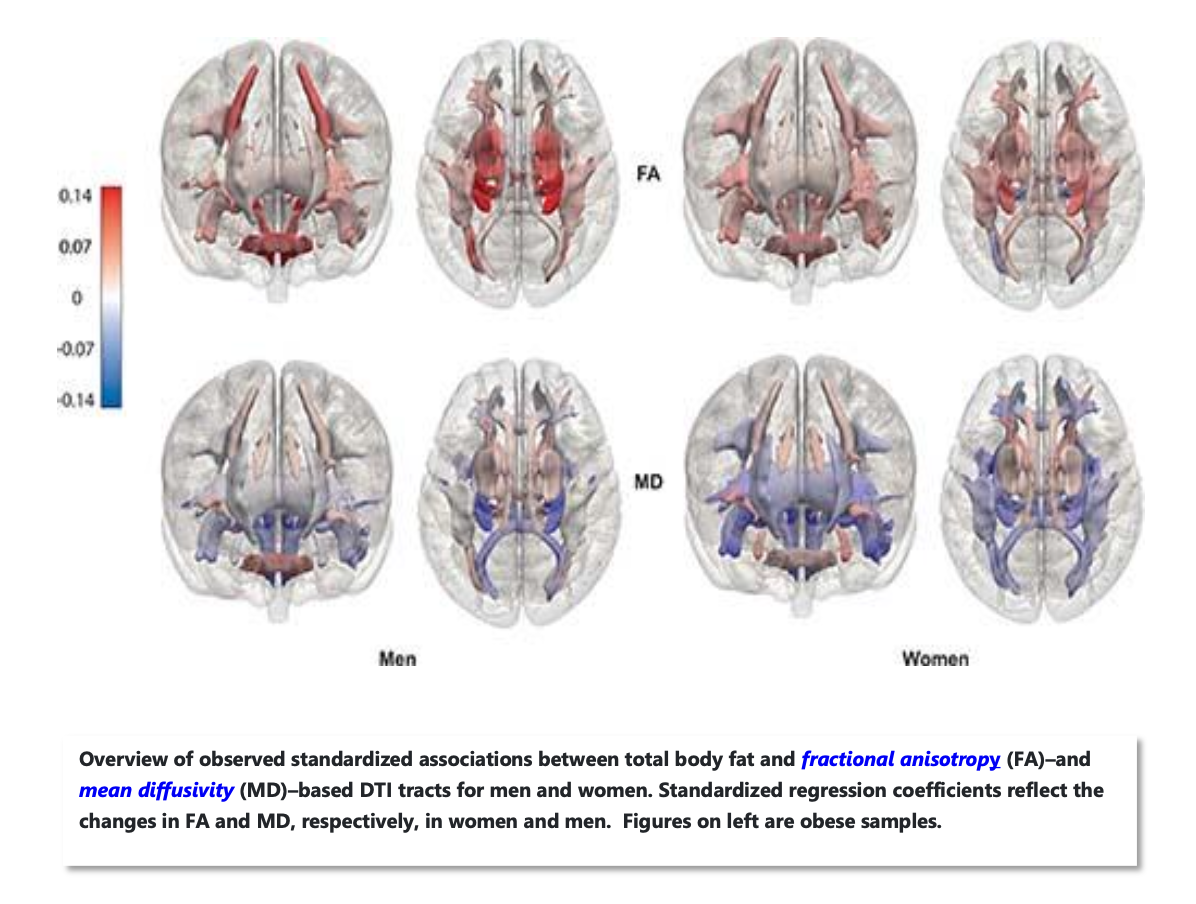 While aging is the strongest risk factor for Alzheimer’s disease, obesity is clearly a co-factor. This requires our attention; we must explore this topic so that Brain Fitness Coaches understand the connection between obesity and brain health. And if possible, we may be able to mitigate problems in the brain before they become full-blown.

Let us continue by looking at some statistics on obesity. The research demonstrates the risks that a poor diet leading to obesity can have on brain health.

A Brain Fitness Coach should be aware of this knowledge because it will be important to share with clients – all clients, not just those who are overweight. Obesity (even for children) is a serious epidemic, both globally and nationally. From a global perspective, according to the World Health Organization (WHO), 1.9 billion adults are overweight with 600 million adults being obese; maybe more troubling – a staggering 41 million children under the age of five are classified as overweight or obese.

In the USA, this epidemic provides a perspective of one of our greatest challenges as a culture; according to The CDC refers to this preventable condition as a “prevalent, serious and costly” disease, with more than 36.5 percent of adults, and 17 percent of children and adolescents managing obesity in the United States.

The costs are also substantial. It is estimated that annual obesity-related illnesses are a staggering $190.2 billion -or nearly 21% of annual medical spending – in the United States. The annual medical cost per household with someone who is obese is nearly $1500.00 more per year than those who are normal weight. Furthermore, obesity is higher among middle-aged adults aged 40 to 59 than older adults or young adults.

Obesity is a risk factor in over 30 different diseases, some of the most prevalent being cardiovascular disease, stroke, cancer, type 2 diabetes, depression, and even dementia. There is a causal factor in much of the literature linking obesity to mental health issues. and psychiatric comorbidities of attention deficit hyperactivity disorder anxiety. and depression. Anxiety and depressive states are associated with a pro-inflammatory phenotype, which may result in obesity. Currently, there are over ten thousand peer-reviewed papers published in the domain of obesity, and using brain function to further refine this search around the terms obesity and cognitive decline yield 634 publications. This issue has a stronghold on our curiosity in the health and medical community.

Normal human aging is accompanied by progressive brain tissue loss, this is simply a fact of life. One factor that influences brain aging is obesity, which has been demonstrated to be associated with detectable brain volume deficits. Obesity is also believed to trigger systemic inflammation, resulting in cascading effects, including chronic hyperglycemia, peripheral insulin resistance, oxidative stress, increased production of pro-inflammatory markers, and cerebral microvascular disease. Adipose tissue inflammation is an important factor in obesity because it has been shown to promote insulin resistance and dysregulation of energy homeostasis. There is also an increased risk of mild cognitive impairment with a BMI in the overweight or obese range, due to development of insulin resistance in the brain. Coincidentally, this has also been found in Alzheimer’s disease.

Obesity is associated with an increased risk of cardiovascular disorders, including hypertension, and stroke, which increases the risk for cognitive decline and dementia. A neuroimaging study that investigates the effects of elevated body mass index on brain volume was performed by researchers using tensor-based morphometry to measure white and gray matter volume changes in 94 healthy elderly subjects over the age of 70, who remained cognitively normal after five years.

The conclusion from this work is that obesity is associated with detectable brain volume deficits, and cognitively normal elderly individuals. Research has also studied obesity as a modifiable risk factor in psychiatric and degenerative diseases.

One study published investigating the effects of being overweight – or obese – on brain function was done using a group of healthy adults. The ages ranged from 18 to 70. When compared brain SPECT images from healthy versus overweight adults as measured by BMI and using SPM analysis, it was discovered that the overweight group showed significant hypoperfusion (low blood flow) in the frontal lobes, suggesting excess weight could impact behaviors associated with frontal lobe function. This may include executive function, impulse control, reasoning, and decision making.

The same clinical trial referenced previously, which investigated the impact of playing professional football on long-term brain function, also demonstrated significant impairments in blood flow to the brain when comparing the athlete group to the group of healthy controls.

To investigate the effects of excess weight on brain function within the same athletic group (football players), nearly half of them were obese at the time (48 percent). Since there was a hypothesis that this would be a significant factor in brain imaging among this group, it was determined that part of the brain rehabilitation treatment protocol for these former athletes must include modifications to their eating habits, in order to reduce inflammation and address symptoms associated with our post- concussion syndrome or traumatic brain injury. This approach was very successful with respect to the weight loss side of the study and this, alone, validates the work of a Brain Fitness Coach. Most of us already work in the field of health, fitness, and wellness. It is a natural extension of our efforts to broach this topic. Researchers would also agree – this is the proper decision to make with research study ethics in mind. The study opted to address the health problems of the participants, as opposed to simply studying what they were or how they manifested.

This same study on football players continued for two years, a somewhat longitudinal study. It then became possible to compare players who were normal weight to those who were overweight as measured by waist-to-height ratio. After matching subjects by age and position, and using SPM analysis, it was discovered that overweight players had not only decreased perfusion in the frontal lobe (as seen in other studies among healthy adults), but also demonstrated significant deficits in the temporal lobes. This most likely impacted their life quality, as mood and memory were likely affected.

In general, many research studies have found a correlation between weight and perfusion, in that perfusion deficits became more pronounced with an increasing waist-to-height ratio.

When working with clients as a Brain Fitness Coach, excess weight matters – whether your client is sedentary, a fitness enthusiast, or a professional combat athlete.