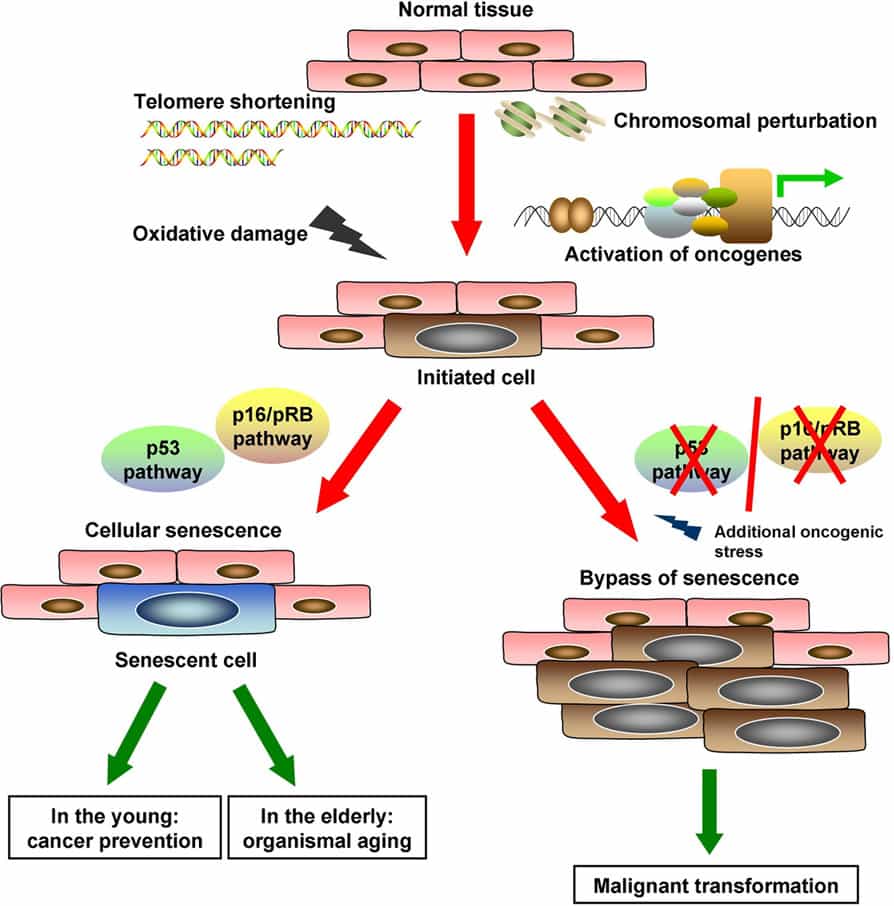 For those that have been keeping pace with my posts on the role of glycation in the processes that constitute the “hallmarks” of aging, you will note that there are recurring elements we continue to discuss (even if from a somewhat different angle). By now I hope readers can appreciate that the given altered mechanics within each hallmark being discussed are significant drivers of aging and disease. But each does not stand alone, but rather they are all linked to the other processes in the hallmark bucket. This post will discuss the hallmark of aging that is cellular senescence. You may remember we have discussed it previously in other posts and will discuss it in the future in the context of other hallmarks of aging affected by glycation.

Simply put, cellular senescence is a “permanent state of cell cycle arrest accompanied by a complex phenotype”(1) that manifest certain characteristic attributes. Despite evidence that cellular senescence is an anticancer mechanism there is increasing data associating senescent cells with aging and age-related pathologies. There is also some recent evidence showing that eliminating senescent cells can actually delay age-related dysfunction in animal models (2). This finding still must be tested in chronologically aged models, but this is the first clear evidence that senescent cells are important influencers of human aging.

One of the early identified actions of cellular senescence was its role in wound healing. In this context the body is dealing with a number of issues including physically damaged cells and inflammation. Senescent cells in the wound healing process would ideally be disposed of by the action of a healthy immune system and, thus, assist the damaged tissue in returning to a healthy state – as long as the mechanism of remediation remains robust. In this process senescent fibroblasts and endothelial cells appear very early in response to a cutaneous wound where they accelerate wound closure by inducing myofibroblast differentiation through the secretion of platelet-derived growth factor AA. (3) So cellular senescence is not a universally negative process as many may infer and in many cases aids in maintenance of a “pro-survival” phenotype.  It is, as is many biological process, both beneficial and detrimental depending on the context and balance. But make no mistake, there is now a strong correlation known between increased cellular senescence and aging.(4)

There are several known triggers and mechanisms that most often lead to senescence. Some of these triggers include telomere dysfunction, DNA-replication dysregulation, oxidative stress, and cell to cell fusion. We have touched on these previously and saw how glycation affects all of these triggers. Another process that we have previously mentioned and that is also very active in creating an environment leading to cellular senescence is the accumulation of damaged macromolecules within cells. Healthy cells can typically deal with and dispose of aggregated proteins before they are become cytotoxic. However, at times due to the inability of these cellular remediation mechanisms to function properly these aggregates linger in cells and begin to accumulate. The types of macromolecules that can be identified to accumulate in compromised cells leading to cell senescence include nucleic acids, lipids and proteins.(5)

Since within cells it is the proteins that perform the bulk of cellular functions we will put our focus here in this discussion.   The effective functioning of the many thousands of proteins in our body requires maintained by a healthy proteostasis network (PN). We know that chaparone proteins and direct functional proteins themselves are subject to glycation that can render them non-functioning and the PN inefficient. Once the PN is compromised it cannot effectively prevent the accumulation of proteins that have been damaged by the action of glycation. This accumulation of aberrant protein aggregates, (which is defined as “any association of two or more protein molecules in a non-native conformation”(5)) leads to a level of cytotoxicity that can lead to cellular senescence. This in turn promotes chronic inflammation as senescent cells in this state may secrete proinflammatory cytokines, chemokines, and proteases.

There are many pathways to protein aggregation and one major one is upstream glycation reactions.   However, here we will point out a specific one that is based on the highly reactive d-ribose molecule.   I pick this molecule as it has been promoted as a beneficial supplement for various fitness and in certain disease mitigation scenarios.   Some of this information is compelling but d-ribose has a darker side.

D-ribose is a naturally occurring pentose sugar that is present in virtually all living cells and is involved in many metabolic pathways.(6) D-ribose is also a very strong glycation reactant in vivo and in vitro. It plays a significant role in the production of protein aggregates as a result of the rapid reaction that alters protein structures. Of all reducing sugars d-ribose is the strongest. It has been recently shown that d-ribolse forms globular amyloid-like aggregats by reaction with serum albumin.(7) This “ribosylation” is a very significant component of cellular protein aggregation. Another example of protein ribosylation is that of the Tau protein. The Tau protein accumulates in neurons (in neurofibrillary degeneration) in a wide variety of disorders including Alzheimer’s. Tau is rapidly glycated in the presence of d-ribose, resulting in oligomerization and polymerization with strong cytoxicity. (8)

In cells supported by a healthy immune system the proteostasis network is able to relieve the cells of protein aggregate stress by clearing them from cells. However, when this process is overcome due to PN deterioration and by continued production of the aggregates this leads to physically and chemically caused disorder within cellular signaling and cellular metabolic pathways. These aberrant interactions ultimately compromise, in an ever progressing manner, protein processes that may leads to disease states often induced by cellular senescence.

Nick Pokoluk is a biochemist, certified Six Sigma Black Belt and certified wellness coach with over forty years experience in the pharmaceutical, medical device and wellness industries and is currently Director of Research for Troy Healthcare, LLC. npokoluk@wwtpi.com and on twitter @veganbiochemist