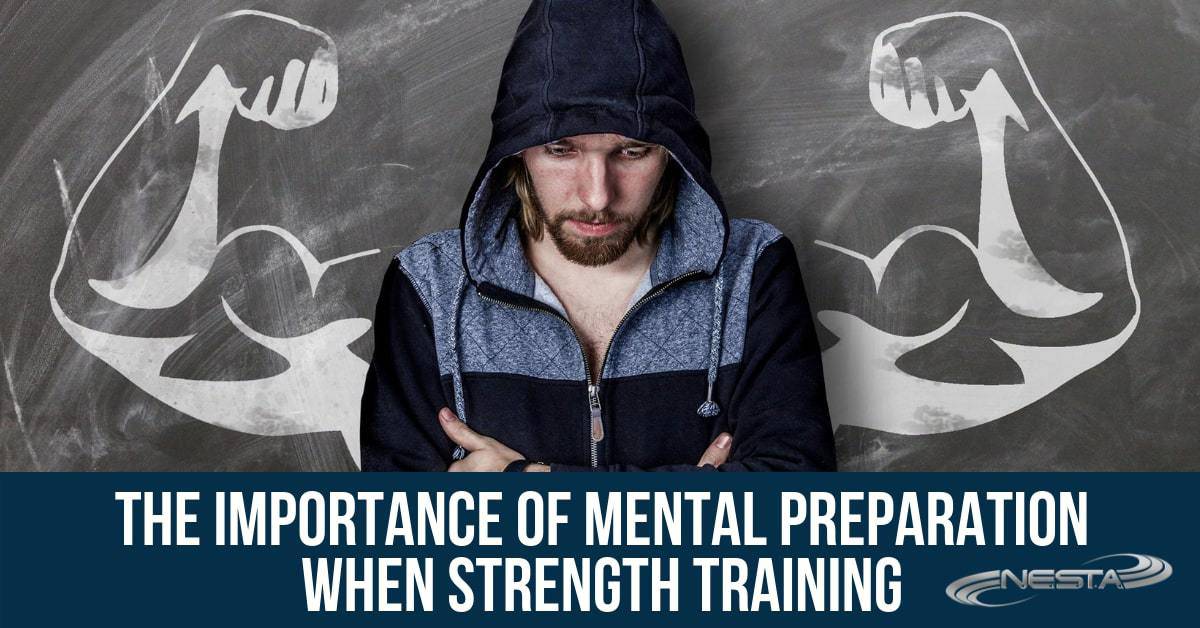 The Importance of Mental Preparation when Strength Training 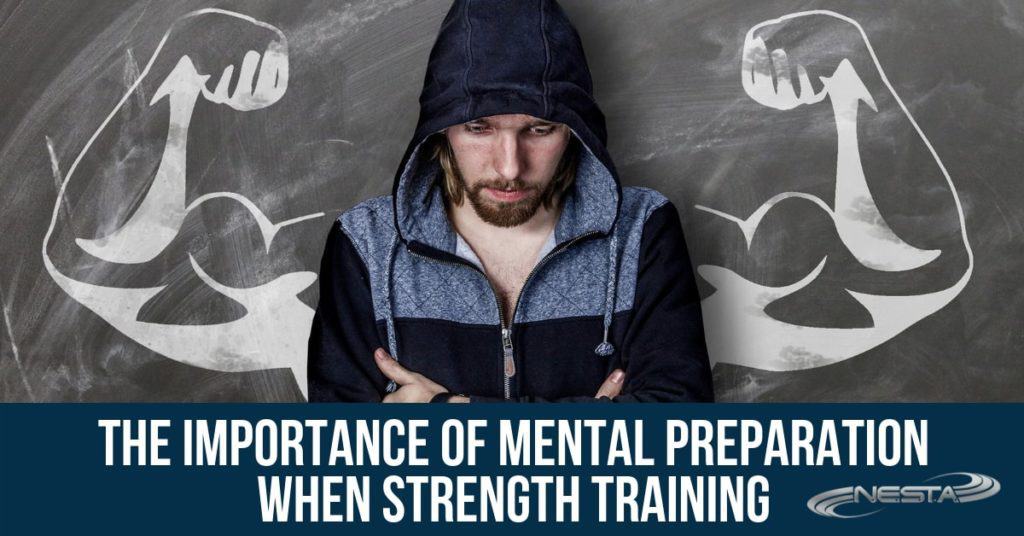 Mental preparation is where many athletes struggle. Perhaps I should simply say, they do not know how to train their mind. Competition is a psychological activity and those who win the most tend to have the sharpest minds. They have a system of thinking and mentally preparing just as they have a system for training the body.

My intrigue with how powerful the mind is started way back in high school. I was always floored when I saw major slackers place top 3 in our county wrestling tournament and sometimes qualify or even place in the states! I would question how lazy, excuse making athletes could succeed at such a high level?

There were a few answers here:

On the flip side, I have seen some of the most dedicated, hard-working athletes never make a dent in the competition! It is heartbreaking because I have worked with many of these kids, and, it reminds me of myself in high school.

The difference here, let’s say in the sport of wrestling, for example, is that one wrestler was confident in their ability and had no fear of losing. They went out on the mat and laid it all out on the line. They fought hard and didn’t overthink. As Louie Simmons always says in powerlifting, “If you’re afraid to fail, you’ll never succeed.”

The athlete who wins has a great attitude, doesn’t get caught up in who he is competing against and focuses on giving their best effort. A negative mindset is physically draining. The mind can actually drain the body of strength & power, all from the stress of negativity thinking. The body merely feels stress, it doesn’t know the difference between the stress of a heavy squat session vs the stress of the fleeting thoughts running through your mind.

When I got into my late teens and early 20s, I began learning how to harness my mind to improve my strength and performance gains. I also learned how the power of a positive mental attitude improved my academics, my social life, and overall life in general. I was achieving more success in ALL areas of my life.

Training your mind is equally important as it is to train your physical self, possibly more important. How can you train your mind? There are countless ways, and everyone must come up with a way that is good for them and reaps the most rewards. What works for me, may not work for you and vice versa.

One major importance is letting go of your fear to lose. All the athletes in the world lose, no matter how great they are. Once upon a time, they lost, and sometimes when they are ranked as the best in the world they lose as well! If you can learn to approach each match, each game or fight knowing that you are going to fight for every inch of that mat or octagon, you increase your chances of winning greatly.

In Football, LAX, Swimming, the sport doesn’t matter, focus on your best effort and that will come easier and easier to you the better prepared you are. Remind yourself that you have done ALL the work in training, nutrition, lifestyle and sports skills. Now it’s show time. Have FUN.

As an adult, apply the same efforts to your life. Going for that job? Starting that business?  Asking out that girl? Believe in your physical and mental preparation. Believe in who you are. Believe in how you live life. This gives you the confidence to focus on your efforts rather than judging yourself based on outcomes.

Blame no one. Don’t blame parents, schools, teachers, etc. If you lose on points but gave your best effort, that is NOT losing. If you win on points but slacked off in training, lived a shady lifestyle, took shortcuts – well, that is NOT truly winning. Live that CHAMPION lifestyle.

Another factor regarding your mental preparation is being able to recover from a setback, which might include a loss when you were expected to win or perhaps an injury midway through a game, match or middle of a sports season.

For example, I used to harp on getting taken down in a match or struggling to finish a move in a match and that negative thought process would drain me of my power during the match. I would then question myself during the match, “Why am I so tired after 2 minutes when I can wrestle for 2 hours during practice?”

I was struggling mentally in my high school years until I began training my mind by reading books about successful people from all walks of life; business people, military, athletes and more. I learned how all successful people focus on a positive mental attitude and giving great effort. They don’t allow setbacks to beat them up, they learn from their mistakes and charge forward with enthusiasm.

My tougher training style began to increase my confidence, especially as I left behind the pretty boy bodybuilding stuff I was doing. The confidence I built from farmer walks, heavy Dumbbell Clean & Press and focusing on STRENGTH rather than “getting the pump” gave me confidence. I trained the mind at the same time I trained my body.

I learned that my mistake in my younger years of harping on a setback is what crushed my success. Sure, I outworked everyone, but my negative mindset erased the work. If you train hard and live like a Champion, give yourself the permission to believe in yourself. Don’t feel bad that you are training to be a Champion. Take Pride!

I recall Dan Gable and his athletes getting very emotional when losing, this was shown heavily in the documentary on Dan Gable which I would watch on VHS in the early 90s.

Often times his wrestlers would cry and be overwhelmed with negative feelings after a match. If you lose in a big tournament or match/game, you need to let any negative emotions work to motivate you instead of them holding you back, especially if you have a chance to make a comeback in the same match/game.

This can be applied to Tennis, Wrestling, Martial Arts, Football, and any sport as well as LIFE. OK, things didn’t go my way, course correct and make a smarter decision. Advance & Conquer. Have an Iron Will. Charge forward!

Focus on the negative too much & you will bury yourself in a hole so deep that you will not be able to get out & refocus your energy towards winning again. In high school, these negative thoughts put me in a hole of depression. I didn’t learn how to control my thoughts until I was 18. It changed my life forever when I began to control my mind and let it work for me rather than against me.

In wrestling, I have watched state champs and national champs lose to relatively unknown wrestlers. I have seen BJJ blue belts tap out black belts! How could this happen? Well, someone demanded more of themselves and took a stand to bulldoze through any and all obstacles that stood in their way. They believed and didn’t worry about their opponent’s accolades.

I’ve seen first timers in the states pinning defending state champs or D1 Collegiate walk-ons beating defending national champs, these events are no longer a shocker to me. We’ve all seen Olympic Gold Medalists lose to a newcomer to The Olympics. It happens all the time.

Take a stand and blaze a winning trail for yourself in sports AND life. Confidence comes through training the mind regularly, even several times daily. Visualize yourself achieving your goals every day. Put yourself on the line by competing regularly and having FUN while competing. Some athletes train very hard but avoid competition because of their fear of testing their abilities.

Surrounding yourself with positive, motivated people will have a similar effect on your own attitude. Hanging out with people who dwell on the negative & complain about everything will only bring you down and literally suck out all the positive energy you once had.

Create an environment that is conducive for becoming a champion. This is why Coaches MUST be great at inspiring, motivating an empowering their athletes. Leave no regrets to be had! The possibilities are endless if you so choose to take the path of being a champion!

For more information, you will want to review the Underground Strength Coach Certification.