Power Is…? How to Explain Force and Energy as a Fitness Trainer 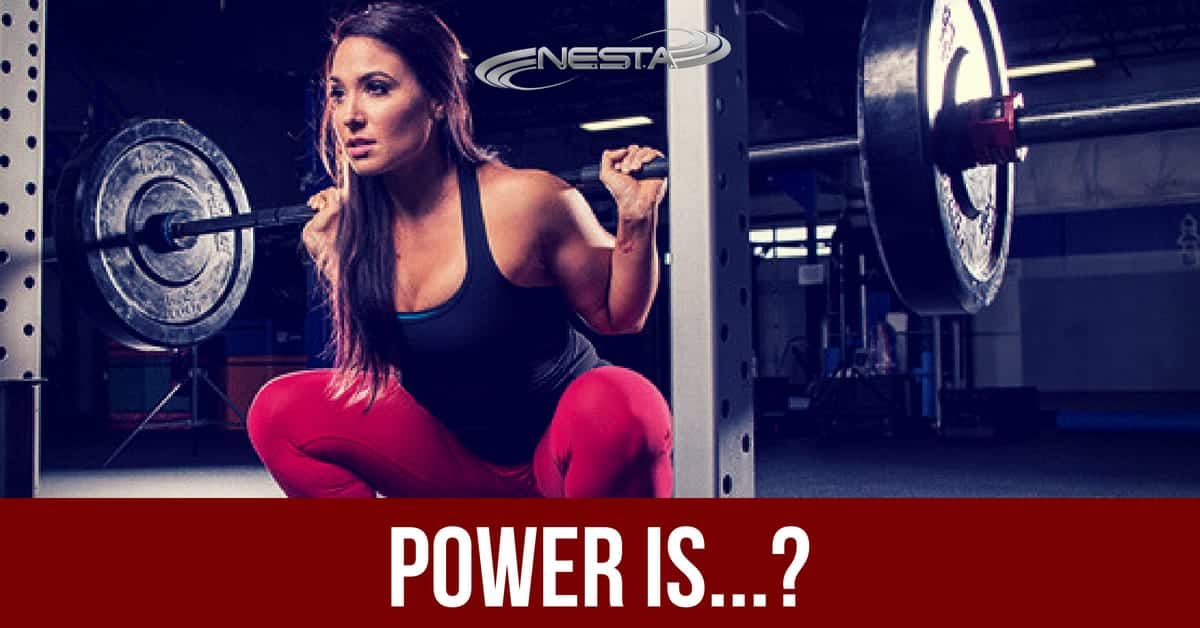 Simply stated, power is the rate of performing or doing work.  Notice this definition considers the rate of doing work indicating a time element when any work is being performed.

Power can be defined as the amount of work produced per unit time or the product of force and velocity (Zatsiorsky and Kraemer, 2006; Cronin and Sleivert, 2005; O’Shea, 1999).  Accordingly, an additional definition of power is the rate of mechanical work performed or the time rate of doing (mechanical) work (Harmon, 1994).

Mechanical work is defined as the scalar product (how much work independent of its direction) of the net force applied to an entity or object with the resulting displacement (sum of each applied force multiplied by the corresponding distance moved in the direction of that force) (Garhammer, 1993; Radin and Folk, 1982).  Mechanical Power, then, is simply the rate of doing mechanical work or work done per unit of time (Garhammer, 1993; Radin and Folk, 1982).

Also included in this explanation is metabolic power, i.e. the rate of metabolic work done per unit of time. Metabolic work is how energy substrates (proteins, fats, and carbohydrates) are broken down (metabolism) to create energy for doing work (hence the definition of energy being the capacity to do or perform work).

So many Citations and Power Papers

Knudson (2009) states that numerous papers have been published addressing ‘‘power’’ in human movement. Just over the last 10 years (1998–2008) Sports Discus and Google Scholar indexed over 500 and 21,000 citations, respectively, for a search on ‘‘muscular and power.’’

With these numerous citations stating what power is (particularly muscular power as an independent subject by itself) the concept of power must be simplified as to what this term means from 1) a basic scientific definition/explanation/interpretation and 2) how power is categorized/defined/created/utilized/displayed in terms of human performance.

Since the term power is considered the timed rate of doing mechanical work, one must know how the scientific community defines power and what work is. Utilizing this scientific information can then be utilized with an applied science approach to identify and explain the basic concepts of work and power as well as increase coach’s, trainer’s, and the general public’s knowledge and ability to develop appropriate training program based on the type of power needed.

Forces are required in all movements to accelerate/decelerate an object or maintain a specific velocity.  These variables are applicable to rotary force (torque) applied to the rotation of segments within a system that causes rotational or linear motion.  Please note that changes in force (magnitude and direction), whether applied slowly or instantaneously during linear or rotary motion, i.e. the RATE of FORCE DEVELOPMENT, directly affects velocity and acceleration of any movement or object in any direction.

In conclusion, power is work performed over a period of time. Work done is explained as force multiplied by the distance the object travels (displacement) or force times displacement. All movement performed involves a power output.  Some movements are done explosively (rate of force development involving starting, acceleration, and explosive strength) while others are sustained movements (sustained force output over an extended period of time i.e. strength-endurance or endurance strength).  Therefore, power is simply strength with speed.

If a substantial force is applied extremely fast to an object, then it pertains to a high power output (high or maximum RFD) i.e. the higher and more rapid force generation (i.e. the rate of force production and impulse-momentum), the greater the power output for the designated period of time.  This more rapid force generation in a short time period also involves starting strength, acceleration strength, and explosive strength.

Schematic of some of the force-time measures used by Tidow, 1990

The ability to move an object is also affected by the mass or inertia of the body or object a force is imposed on.  Mass is the measure of a body’s inertia or the amount of mass in a body. Inertia is the resistance of a body to change its state of motion (static or dynamic).  This is explained by Newton’s first law of motion:

Every object or body remains in a state of rest or uniform motion (constant velocity) unless it is acted upon by an external unbalanced force, meaning that in the absence of a non-zero net force, the center of mass of a body or an object either remains at rest, or moves at a constant speed in a straight line.

Based on this, how fast on a body or object moves is subject to slow down based on how heavy it is.  This is the essence of the force-velocity curve.

Notice that when the load is increased muscles increase eccentric actionability (force production for resistive force) in an attempt to decelerate (slow down or resist) a moving object.

A simplified power-velocity curve illustrates how power increase with velocity but only up to a point.  After that, the “peak power” value, however, changes and an increase in velocity causes a decrease in the maximum force muscles can generate.

The rate of force production, known as muscular power production in the training community, is present in all activities.  Note that the power of muscular contractions, or RFD, varies considerably with different combinations of muscle force and speeds of contraction and highly influenced by the mass or inertia of the system being moved.

Strength and speed are the key elements for the differences in mechanical power and how it is developed.  We now will look at what biomechanics is in order to ascertain how force is developed or produced and its effect on power output. Please remember biomechanics and kinesiology go hand in hand with the concept of power output.

Principia (Philosophiae Naturalis Principia Mathematica (Mathematical Principles of Natural Philosophy), or Principia, is the book written by Sir Issac Newton.  This is the book most famous for introducing the world to the laws of physics. Newton presented his three laws of motion and his law of gravitation.