Kinetic Energy in Relation to Biomechanics – Knowledge for Trainers 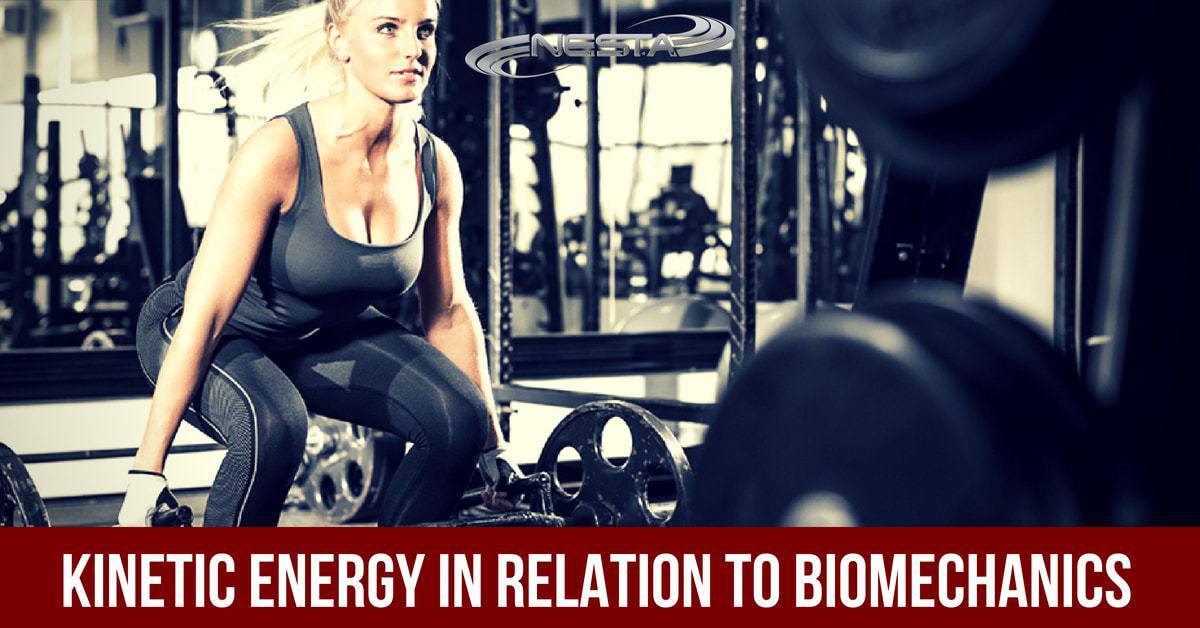 Energy in Relation to Biomechanics

Energy is a form of force (capacity to do work).  Total energy expenditure and rate of energy expenditure (power output) are important considerations for exercise programs and training programs.  Work done and the time taken to complete this work is the essence of power output i.e. power flow that is present in all human movement.  However, in all human movements (activities of daily living, sports, exercise programs), there is ample concern with changing the velocity of an object (remember that velocity is simply the distance an object travel in a specified time).

When an object’s velocity changes it subsequently changes the kinetic energy (KE) thus establishing the work-energy principle (KE can be changed by doing work). Increasing the work done will cause a greater increase in energy output (usage) if the average force exerted is of large enough quantity or the displacement (in line with this force) is long.

The term energy is another term widely used outside technical discussions. This usage, however, is not as frequently at variance with the technical definition of the word as in the case of work.

As previously stated, energy is defined as the “capacity to do work” and therefore, when individuals state they have no energy or (alternatively) say they are full of energy, this could be interpreted as meaning they had either no capacity for work or they have a great capacity to do work.  Total work done is more precise for estimating energy expenditure.  These estimations also examine the RATE at which work is utilized.

Here is an additional example of energy expenditure/power output in activities of daily living (ADL):

A person having a mass of 100 kilograms who climbs a 3-meter high ladder in 5 seconds is doing work at a rate of about 600 watts. Mass × acceleration due to gravity × height ÷ the time it takes to lift the mass to the given height gives the rate of doing work or power.

A laborer over the course of an 8-hour day can sustain an average output of about 75 watts (NOTE: this is dependent on body mass). The following is an estimation of the basic energy needs of a 75 kg person (Garhammer, 1996):

Another example of sustained power output is the same 100 kg person carrying a specific load for a continuous period of time, e.g. carrying a 15 kg box 5 kilometers in 45 minutes. This is estimated to be about 2100 watts (Note: Force is calculated as the 100 kg body mass combined with the additional 15 kg load).  High power levels can also be achieved for short intervals and by athletes.

Work has been defined as the product of force and displacement (mechanical work) and utilized for estimating energy expenditure.  In mechanics, energy (as previously stated) is defined as the capacity to do work. There are various forms of energy:

Any moving object has the capacity to perform work based on its motion.  This is what kinetic energy (KE) is. As in power output, KE is affected by the mass and velocity of an object.  The formula for KE is:

Using the previous example (overhead press), the mass of the barbell is 30 kg and the velocity is calculated as d/t (distance is .4572 meters divided by the time of 2 seconds). This would equate to:

The unit of KE given here derives logically from considering the units used to measure the various quantities shown on the right-hand side of the equation (KE = ½ mv2).  This explanation is rather awkward and for this reason, is rarely used.  Instead, this latter quantity is measured in Joules therefore very convenient to use the same unit in measuring all forms of mechanical energy.  This change in the unit is greatly enhanced by the fact that:

Thus, whenever the KE of a body is calculated, with the mass in kilograms and velocity in meters per second, the answer should be in Joules.

Potential Energy (PE) is the energy (capacity to do work) an object has based on that object’s position.  There are two types of PE: gravitational PE (energy due to an object’s position relative the earth; and strain energy (SE) which is the deformation of an object

Once again, when estimating PE,  Newtons are used for the units of force times the length (Nm) which is equivalent to joules (which is the same for kinetic energy and work). How is PE estimated?  Again, use of the mass of the barbell from the Overhead Barbell Press will be useful (30 kg).

This is the potential energy of the barbell in this stationary position overhead.

Strain Energy (SE) is another type of potential energy and is used in sports and exercise training. The lengthy definition of SE is:

Energy principles in structural mechanics express the relationships between stresses, strains (or deformations), displacements, material properties, and external effects in the form of energy or work done by internal and external forces. Since energy is a scalar quantity, these relationships provide convenient and alternative means for formulating the governing equations of deformable bodies in solid mechanics.  The simpler version is:

Strain Energy is the energy contained in any material due to the deformation of an object.

SE of any object is correlated with the material’s stiffness, material properties, and how much it will be deformed when a force is imposed on it.  The formula for SE is:

k = stiffness or spring constant of the material

A material’s stiffness is expressed in N/m, therefore, its strain energy is expressed in (N/m) m2. This is equivalent to Joules (ironically the same unit of measurement as GPE, KE, and work).

Please take this type of energy into serious and careful consideration.  In sports, as well as in all human movements, there is energy stored and possessed by the individual and objects due to their motion (which is KE or kinetic energy), their position above the ground (GPE or gravitational potential energy), and the amount of deformation (SE or strain energy).  Most textbooks are primarily concerned with the first two (KE and GPE), but much consideration should be addressed toward SE (strain energy) due to the connective tissue involved in all human movement (particularly when this CT is stressed beyond its capability due to injury or improper training).  SE drastically affects power output and is also a factor in various materials used by athletes/competitors to increase performance.

This is an example of material strain energy used in sports: a powerlifter using a bench shirt during a competition. The shirt is made of a special type of material to enhance strain-energy which increases the amount of weight lifted in the bench press movement.

Definitions of both work and energy directly indicate a strong relationship between these two subjects.  Work was defined as the time rate of doing work with energy as the capacity to do work. Since the two are intimately intertwined, an additional definition of work by McGinnis (2005) states “It is the means by which energy is transferred from one object or system to another.” Both share joules as a unit of measure indicating both are related.

How then are work and energy related? Again, use of the previous example (Overhead Barbell Press) will reveal additional similarities.  The lifter pressed a 294 N barbell overhead approximately 1.5 feet or .4572 meters. The work done by the lifter was 67.2 and 134.4 J respectively (depending on the speed of the movement example).  A question to ask is: How much more energy did the barbell have after it was lifted? Since the object did not have any more kinetic energy due to its non-moving state before and after the lift/movement, what was the change it the barbell’s potential energy?

The results show the change in PE of the barbell was approximately 134 J (which is the same as the faster movement – work completed in one second).  These results indicate that work done causes a change in PE or that work may cause a change in total mechanical energy. This example of a press, as well as any movement (like a discus throw, shot put, clean and jerk, etc) all demonstrate the work-energy principle which states that any work done by the external forces (independent of gravity) which act on an object causes a change in the energy of the object (MCGinnis, 2005; Enoka, 2002; Hay, 1993). This relationship can be expressed mathematically as:

Interested in learning more about Biomechanics and how you can utilize Biomechanics with your clients in your personal training business? Check out the Biomechanics Specialist Course!