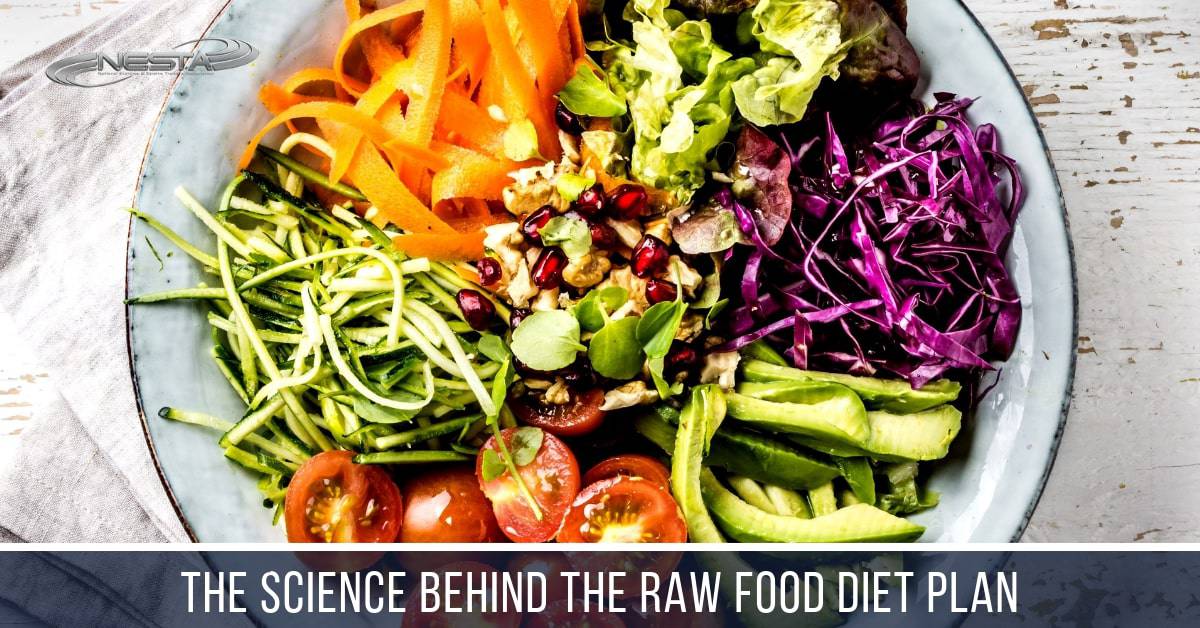 The Science Behind the Raw Food Diet Plan

What is a Raw Food Diet?

The raw food diet is exactly as the name suggests — it is a type of vegan diet that consists of eating raw, unprocessed, and uncooked foods. It is also sometimes called a raw vegan diet.

Thus, all meat, poultry, dairy, and eggs, as well as any food containing animal by-products, are excluded in this diet. The diet allows the use of a food dehydrator as the only means of “cooking” food, but the food should never reach a temperature above 118°F (48°C).

The basis of this diet is centered around the idea that raw foods have the highest level of energy based on principles of thermodynamics. As you heat foods, many nutrients get lost and important enzymes in the food get degraded. Thus, foods in their raw, natural state provide the most benefit for our health.

However, when speaking of a raw food diet, typically the majority of individuals who follow this diet will be vegan, as this is the safest subtype of the raw food diet because it does not contain the consumption of any raw meat or eggs. Thus, this is the subset that we will be focusing on in this review.

The Benefits of a Raw Food Diet

Although few large-scale studies have been conducted on a raw foods diet, results of the studies done have shown some health benefits, and there are many anecdotal reports of overall improvements in health from individuals who have been on this diet for a long period of time. According to advocates of this diet, eating a raw foods diet keeps the enzymes in food intact, which reportedly facilitates digestion and increases absorption of nutrients. Additionally, there are far more nutrients in raw food, as cooking and heating up certain foods decreases the amount of vitamins available in the food, especially vitamins C and E. Studies have shown that individuals on a raw food diet had significantly higher levels of antioxidants in their system compared to individuals on a regular cooked, omnivorous diet.

Dietary antioxidants have been reported to act as anti-cancer agents in several studies. The role of antioxidants in the body is to collect molecules known as ‘reactive oxygen species’ (ROS) so that they become unavailable. ROS molecules play a role in the progression of many diseases involving inflammation, including cancer. Thus, a raw food diet that increases dietary antioxidants in the body may really help to prevent diseases such as cancer. Studies on the raw food diet have also reported significant weight loss as a result of switching to this diet, which may be beneficial for individuals that are overweight or obese. The diet has also been beneficial and recommended for individuals with digestive and bowel problems (particularly constipation) because it is extremely high in fiber.

Some studies have reported improvements in symptoms associated with diseases such as rheumatoid arthritis (RA) and fibromyalgia. A Finnish study analyzing the effects of a raw food diet on patients with RA and fibromyalgia reported that patients had improvements in subjective symptoms, such as joint stiffness and pain. The change in diet greatly altered the patients’ gut microflora, and the greater the change, the greater the reported alleviation of symptoms. This correlation is most likely due to the fact that diseases such as RA and fibromyalgia are worsened by inflammation, which can be caused by certain inflammatory foods that the raw vegan diet generally excludes.

Additionally, a healthy gut microflora is strongly linked to a decrease in inflammation in the gut because the healthy gut bacteria produce nutrients that reduce inflammation. In fact, many individuals on the raw foods diet claim that they chose this diet for health reasons, specifically the prevention and treatment of diseases. Additionally, switching to a raw foods diet is correlated with a decrease in LDL-cholesterol, which is the “bad” cholesterol that is linked to cardiovascular disease. This is most likely due to the fact that this diet excludes many of the common sources of fat, such as red meat and dairy.

The Consequences of a Raw Food Diet

By far, one of the biggest challenges reported by individuals on the raw foods diet has to do with social pressures. It is very difficult going out to eat with friends or family because the raw food options at any given restaurant are extremely limited. Additionally, individuals report receiving a lot of hostility from others towards their diet choices.

In terms of the reported health benefits of a raw foods diet, there are many scientists that doubt the benefits of eating foods with their enzymes still intact. While enzymes can and do get damaged by heat, the body already produces all the enzymes necessary for digestion, and therefore we don’t need to get these enzymes from food. On top of that, the acidity of the stomach will inactivate these enzymes anyways, so they cannot even reach the small intestines to help with digestion and absorption of nutrients. Not only do some scientists disagree with the claim that intact enzymes are beneficial, but some also disagree that nutrients in food are lost when they are heated.

Heating up certain foods, such as tomatoes and carrots, actually breaks up the fiber, which releases certain nutrients that would otherwise not be available in the raw state of the food. For example, tomatoes contain much more antioxidants and less vitamin C when they’re cooked compared to raw; however, research suggests that the decrease in vitamin C is insignificant, as it is such an abundant vitamin in so many different fruits and vegetables.

The bio-availability of beta-carotene, the antioxidant that gets converted to vitamin A, in carrots significantly increases when the carrots are cooked. On that note, some foods are actually quite difficult for the body to digest in their raw state because of their high fiber content and cooking them makes them much easier to digest. Additionally, some plant foods contain natural toxins that protect the plants from insects and certain diseases, but these toxins can make individuals feel sick or nauseous. Cooking these foods breaks down their toxic components and makes them safer for humans.

According to studies, most individuals on a long-term raw food diet are deficient in vitamin B12 and should therefore consider taking non-food supplements. However, many people on this diet disagree with taking any pill-form, non-food supplements because it is not a natural, raw food. They believe that the raw food they eat should give them all the nutrients and energy that are required to be healthy.

Many individuals on the raw food diet are not meeting adequate protein intake requirements, as their sources of protein are significantly limited. Most vegans rely heavily on legumes as their source of protein, but a true raw vegan diet excludes any cooked beans, and they cannot be eaten raw. Overall, it is difficult to consume enough energy on this diet and weight loss, although beneficial if you’re overweight, could become a concern. A study examining the effects of a raw food diet on weight loss reported that 70% of the women following this diet lost a significant amount of weight that actually led to irregular menstruation and many even developed amenorrhea —the loss of menstruation completely. This condition often occurs with an extremely low-calorie diet and can lead to problems with fertility in the long-term.

So, What’s the Verdict?

As research pertaining to vegan diets increases, we are becoming increasingly aware of its health benefits. However, the verdict is not so clear when it comes to the raw vegan diet. On one hand, individuals on this diet have seen significant improvements to their overall health and the very reason some have switched to this diet is for the prevention and treatment of certain diseases.

Indeed, there have been reported improvements in rheumatoid arthritis, fibromyalgia, and reports of significant weight loss on this diet. On the other hand, the entire basis of this diet is that nutrients and enzymes are kept intact in raw foods, and therefore this is the healthiest way to eat them. This very claim has been argued against by many scientists who have shown that intact enzymes are essentially meaningless to humans once ingested, and some foods may actually have more available nutrients when cooked.

In the end, the research is too limited to make a clear conclusion as to whether this diet truly is beneficial or not. It may be worthwhile to speak to your physician or dietician about the raw food diet if you think it may help improve any specific diseases or health conditions you may have. If you decide that this diet may be for you, be sure to take supplements if required, and be sure that you are taking in enough calories and protein.

Our programs are open to anyone with a desire to learn and help others. There are no prerequisites.